Shortly after Christmas, word spread across the country of the devastating impact of the Marshall Fire in Boulder County. There were a few hours or days of national mourning, a flood of numbers / statistics and a presidential visit – but then silence. Concerned people across the country wondered what could have caused the blaze. Downed power lines, strong winds, climate change, cult ceremonies that have degenerated, etc.

Near the epicenter, however, those affected focus much less on the cause than on the effect.

In Boulder, your separation rings from the impacted disappear. It seems everyone has a friend, coworker, or family member who has lost their home. As a teacher, the empty chairs in my classroom represent students who still have no home to return to. If you lived near the epicenter but your house remained standing, the ensuing winter storm froze your pipes due to lack of electricity. The impact is unprecedented in Colorado history.

There are murmurs of how lucky these residents are. Many of the homes that were burnt down have been valued at close to $ 1 million, and there are assumptions that everyone affected will do well because of their financial well-being. After walking the streets of a burnt down neighborhood, I’m sure the residents feel anything but lucky. After all, how many lost items were irreplaceable? A “Happy Father’s Day” coffee mug your son made for you when he was six, the back fruit tree that had been pruned and raised for years, the seven year old Labrador retriever that had his own personality. No amount of insurance money will ease the pain of these losses.

Stopping for coffee this morning, the parking lot at the Louisville Public Library was busy. Dozens of families dragged boxes from their cars to the library, left, then another family filled the same parking space. As I walked inside, dozens of other families were putting toys, books, furniture, water crates, kitchen supplies and many other donations on tables in a makeshift community hall. . I recognized an old colleague with her two young children who were setting up a Barbie playhouse on a table called “Dolls”. We kissed and I asked how she was holding up. Tears came to her eyes as she looked down at her children and said in a more lively tone: “The children said they wanted to give their Christmas presents to the boys and girls who lost their homes. and their gifts in the fire. ”

A number of volunteers have organized a center to donate supplies for families who have lost everything in the fires. Even though there were dozens of people around, the room was relatively quiet. There were tearful hugs and greetings, but the atmosphere was more respectful than joyful. The community asked no questions and many locals gathered to help those in need. Emotions were running high here. If the pandemic wasn’t the unifying disaster we thought it would be, for Boulder County, it was the disaster that united us.

Strangers helped strangers lift donation boxes, kids dropped off bags of LEGO sets, and busy volunteers guided the river of donations to their right places. Friends of the family thought that the fire was probably not going to reach their house; they evacuated, just grabbing important papers and hard drives. Two days after the fire, they received confirmation that their house had been burnt down. The loss of family heirlooms, freshly opened Christmas presents and the comforts of home have loosened their lives.

Donations and massive help from citizens are a sight to behold. Few recent events have been able to restore our faith in humanity. To see the community come together during this disaster is impressive. A library volunteer has a name tag on her sweater that says “Kathy”. I ask if she is responsible. She shakes her head and says, “The woman in the white vest is in charge. I don’t know her name, but she’s been the ringleader so far.

I walk over to the woman in the white vest and ask her if all is well if I take some pictures to capture the emotion of the event. She nods and says I have to finish my shots before the affected families arrive; she wants to make sure they have privacy during these difficult times. This stranger in the white vest that no one knows will work all weekend to coordinate the influx of donations. My faith in humanity has been restored. 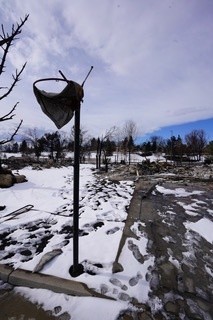 After passing through a decimated neighborhood, President Joe Biden revealed that the impact is “as devastating as it sounds.” As I walked into another shaved neighborhood, the smell was unexpected. Burnt plastic seems to be more appropriate descriptors. Burned-out cars, bricks and metal garden decorations are all that are left of the thousands of structures destroyed by the Marshall fire.

Families with tears in their eyes sift the ashes with shovels, hoping to find sentimental objects spared by the flames. A storage bin full of photos from the 90s, your computer with all your family photos, an urn that was on the fireplace. All that’s left is the basketball hoop at the end of the cul-de-sac, the melted plastic back panel on the sidewalk. The burnt frame of a trampoline in the yard. Without fences, trees and houses to block the view, miles of rubble and ash are revealed. A scorched metal weather vane spins in the breeze past a pile of ash that was once a four bedroom house. A number of houses still have chimneys or brick façades, this is where firefighters spray-painted an orange number revealing the address of the destroyed house. Without these numbers, it might be difficult for homeowners to find their home’s remains.

Most homes don’t have anything vertical to the left, so firefighters paint the house number directly onto the driveway, in one case next to the charred skeleton of a Jeep Wrangler. You might assume that new houses, sod, and trees will start arriving every year now. Right now, however, the ghosts of the past are the only things you can focus on as you walk this scorched earth.

The Marshall Fire is no longer on the national news, but for Boulder County it is still high on our minds. The emotional roller coaster of desperation and community help is powerful and humbling. It is certainly our unifying disaster.

Dustin Bailey grew up in the mountains of Colorado. In addition to teaching, he has cooked professionally, worked on biodynamic farms and in plant genetics laboratories; he recently founded Farm to Bus, a rolling farmers market. See more of his work here.

Westword fFrequently posts opinion pieces and weekend essays on westword.com. Do you have one that you would like to submit? Send it to [email protected], where you can also comment on this piece.