When Frances Druce took over Copyhold Hollow – in the High Weald, West Sussex – this 16th century house with its old box hedge had no garden to speak of. Undeterred, she built one herself, reveals Annie Gatti. Photographs by Mimi Connolly.

When Frances Druce became the owner of Copyhold Hollow, a 16th-century house tucked away behind a wavy box hedge in Sussex’s High Weald, in 1993, her plan was to redo it herself and then sell it. It was to be her fifth renovation and making a garden for herself was far from her thoughts. However, the charm of the building and its cradled position at the bottom of wooded slopes that stretched beyond her two acres to the mixed woods of the Borde Hill estate, whose house she purchased, quickly made her change her mind. . “I was only here about 24 hours,” she explains, “and I thought ‘I can’t sell this’.

Initially, the house, which had been inhabited by a land agent from Borde Hill and had, in the 1840s, served as a tavern for the railwaymen who built the Ouse Valley Viaduct nearby, was the priority. She removed the oak siding on the exterior and replaced it with handmade clay tiles by Swallows, then re-roofed the house.

Then she “dismantled” the interior and restored it to its 16th century roots, complete with modern conveniences. She then added an extra square room at the back of the house, only using a mason for the masonry and the construction of the chimney. Where, I asked Miss Druce, did she learn the skills to do most of the renovations herself? ‘Oh that’s very easy. If you can make a dress and frost a cake, you can build a house. They have the same principles.

Doing the garden was a much bigger challenge, as she knew very little about gardening. There were practicalities to start with: she needed to install drains around the house to cope with the high water table and a flat area was needed for a car and a garage. A JCB was hired to dig 28 truckloads of dirt, creating the sunken terrace around the house which today is a cozy mix of paving slabs and brickwork, interrupted by beds filled with shrubs and plants perennials that are resistant to dappled sun and clay. ground.

One of the natural springs has been channeled into a stream which emerges from the back of the house and empties into a deep pond, forming a watery border to a rustic seating area.

This all developed organically, but Miss Druce admits that after several factory outages she realized she needed to be better informed and sign up for a general HHR certificate course. “Little by little the pennies started to go down as to what you plant where, although there are some things that need a lot of sun and I still put them in. I can’t resist the roses and they don’t do particularly well, but varieties like ‘White Gold’ do.’

She filled the edges of the creek and pond with bog- and moisture-loving plants, planted clematis to climb the metal arches that hide the parking area, then started tackling the wooded slopes. , dominated to the south by the matriarch, an imposing copper beech. , and to the east by a patriarchal dawn redwood. The land agent had planted a number of trees, but by the time Miss Druce arrived, ash and sycamore seedlings emerging from the brambles had formed impenetrable thickets and she had to fight her way through, machete in hand. 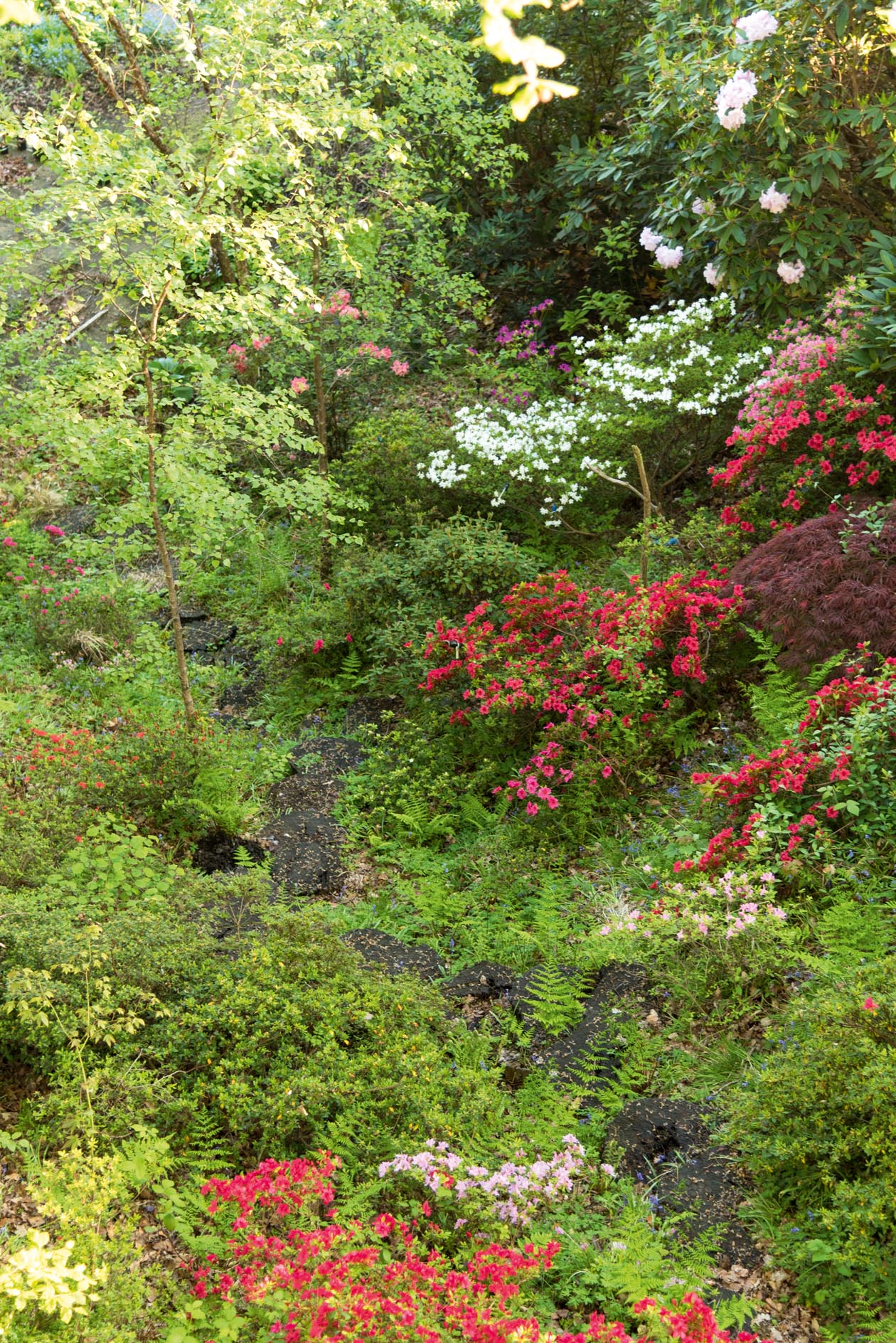 A valley of rhododendrons below The Lookout, where Miss Druce sometimes sits. Photograph by Mimi Connolly

After the arduous clearing, she began to create the informal, winding road that climbs from the east side of the house to the highest point of her lot to the south and back down through its “wild and woolly” part to the west. , laying down tons of sandstone and fines to make paths where she tended to tread.

Among her first plantings were rhododendrons, which she calls the waitresses of the plant world. A purchase of three white flowers Chionoid Rhododendron, of Glendoick, Perth, and the subsequent failure of two of them led her to come across the planting of mounds. Fed up with trying to make a planting hole for a replacement rhododendron in the solid blue and yellow clay, she threw it on the ground, threw some homemade compost around it and, to her delight, the plant survived . “Now I know that planting mounds is a recognizable form of gardening and I use a 50/50 mix of potting soil and compost.”

Another purchase of a collection of stick-shaped camellias, which also began to thrive, set her on the path to creating a wonderfully varied woodland garden that begins spring with sweeps of fresh green ferns and a white, pink and blue ground cover of wood anemones. , Cyclamen coumnative hyacinths and hellebores, followed by epimediums, Solomon’s seal and forget-me-nots, under a mix of shrubs such as witch hazel, azaleas, acers and rhododendrons.

Miss Druce has created various resting places dotted around the woodland garden, including a platform furnished with a rustic table and chairs set under the copper beech and a bespoke oak and chestnut viewing platform that sits wraps around the trunks of two oak trees at the top of the garden. Timber-lined steps cut into the steep slope and lined with rhododendrons and azaleas, in shades of white, hot pink and red, create a shortcut between the lower platform and the treetop one, where Miss Druce very occasionally allows herself to sit with a book and a cup of tea, drinking in the dizzying view up to the house and its sunny herb garden and across a lush meadow to a thick strip of ancient woods of Wealden.

For four years, she was supported by a WRAGS (Work and Retrain As a Gardener Scheme) apprentice, working with her two days a week. Now she runs the garden and opens it to the public in early summer for the National Garden Scheme, with only the help of a friend who lends his muscle strength one day every three weeks or so. 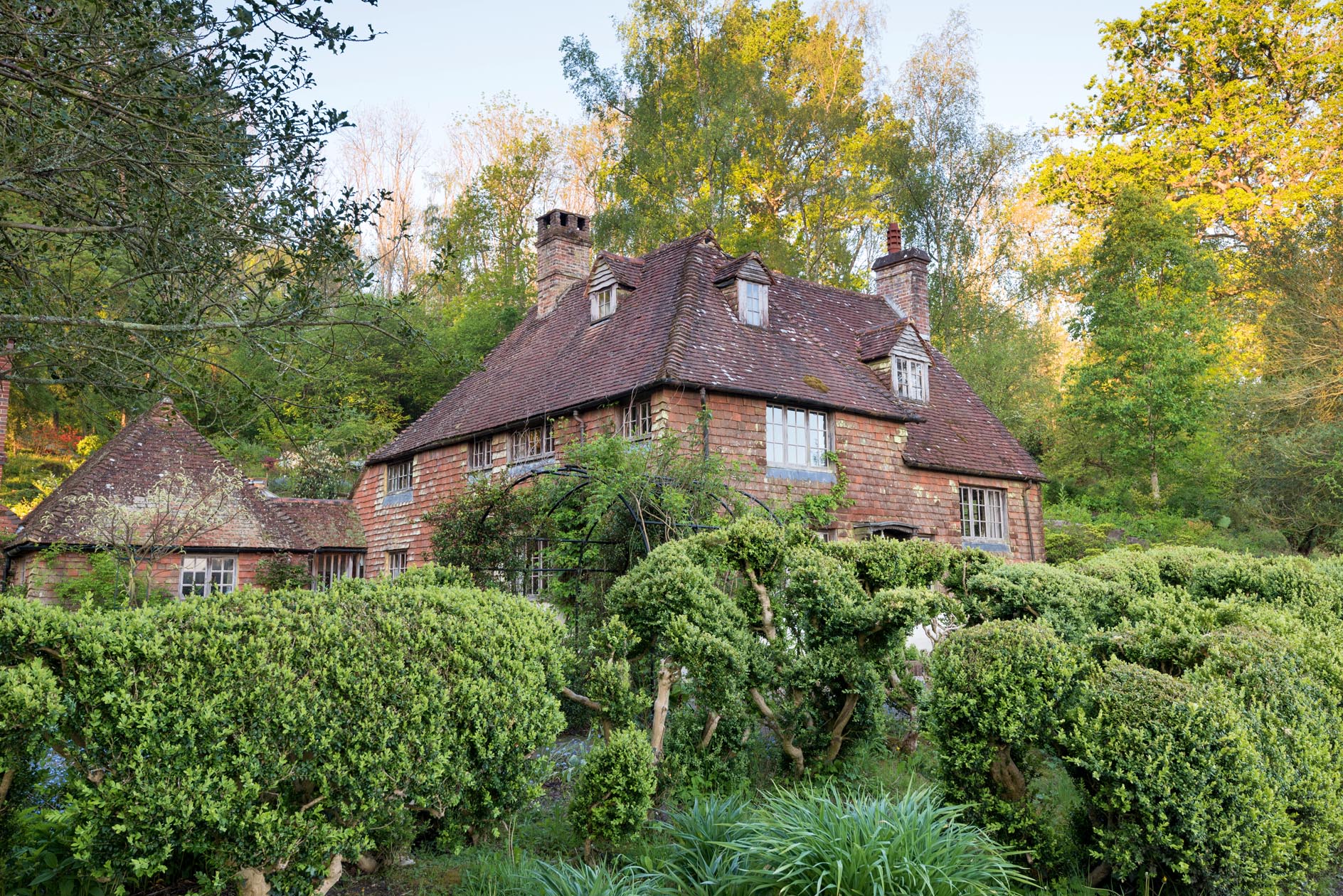 If she plants anything on the upper slopes, she has to bring the water up by hand. Somehow she still finds time to propagate rhododendrons and azaleas and sell them at the front door, but her plans for the future include more shrubs and fewer perennials. for the wooded garden, as well as the simplification of the lower garden.

She doesn’t skimp on her humus production, however, which is supplemented with bags of leaves from friends’ gardens: “I think what you put on the ground is more important than what you put in the planting hole. . Visitors to the garden, in any season, will certainly be convinced of his methods.

Our weekly recipe slot this morning isn’t so much a recipe as it is a method: how to make real Italian pizza

Segdwick Park’s 750 year history has seen all sorts of changes, but thanks to the vision of its owners in the

Park Farm is a charming old timber frame house set in 32 acres of gardens and parkland near Slinfold, West